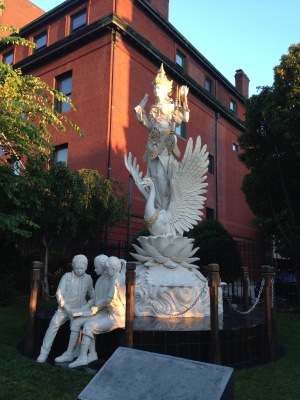 David Davies in his article, “The Primacy of Practice in the Ontology of Art,” tries to defend Julian Dodd’s “simple view.” Although he thinks that Dodd’s position on simple view is articulated and persuasive, but he believes that Dodd’s reasons for defending the simple view is insufficient.
The simple view tries to answer two fundamental questions; 1) To what ontological categorical artworks belong? 2) Identity question, i.e., under what conditions an artwork is the same. According to the simple view, the musical works are type-token, which is, eternal “sound-sequence event.” Since musical works are viewed as eternal sounds, then the act of composition and notation are not created but are a matter of discovery. To the second question, it states that, as Dodd affirms, “according to sonicism, when it comes to the individuation of works of music, all that matters is how they sound” (Dodd 9).

Davies brands his ontology of art as “aesthetic empiricism,” a view that maintains an aesthetic experience is consists of an immediate encounter with an instance of work of art and a “knowledge of the category of art to which the work belongs” (161). This view contrasts with the view of Dodd, with endorses type-token theory. Dodd believes his theory has an advantage of two essential feature of music, which is repeatability and audibility. Davies believes that Dodd’s ontology posits what he calls it “pragmatic constrain,” according to which “it does not require that ontology conform to our practice per se, but to those features of our practice that we deem acceptable on reflection” (162). The role of pragmatic constrain is normative, and its role is to correct our practices of art by showing us what kind of properties we can rightly ascribe to artworks. Hence, it gives us an evaluative tool to exclude works that do not meet true ontological requirements. In contrast Davies believes that ontology of art should make the artistic practices its primacy.

For Davies, the problem of individuation can be solved on the bases of the identity of the of the properties normative for their proper appreciation” (170). Despite what Dodd assumes, Davies states, the starting point should not be categorical questions and then consider the questions regarding individuation of works. Davies’ approach starting point is to understand what is already established as artwork. Then tries to build an ontology of art based on observing what is already established. However, one problem with Davies, if I have understood him correctly, is that we see artwork through our aesthetic lenses that direct our attention to a certain ontology of art; consequently, those lenses ascribe the properties to the artwork. As a result, in the artwork we see what we want to see. Therefore, we appreciate what we already had in mind rather than what the artwork represents. I found Dodd’s position more realistic for it acknowledges the fact that we do not look at artwork with a mind without a theory; therefore, we need to have a set of normative tools to show us how to appreciate the work of art. Indeed, a normative ontology can help us to individuate artworks in a more effective way. Furthermore, if we merely rely of primacy of practice, we would have hard time to appreciate innovative art since it is not part of what is already established as art.