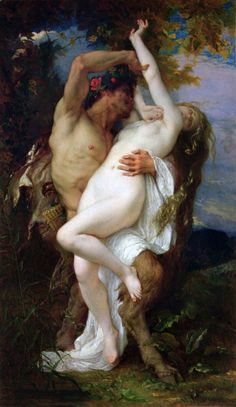 An ancient aphorism says that death and love are the two main themes of poetry. These two inventible components of life, to some degree, have seduced all the great writers. In a sense, poetry and rhetoric share the same quality, which is the quality of capturing the audience. Poetry, and in a lesser degree rhetoric, itself, not only because of its theme, but also because of its source of inspiration and the style of expression has been known for its capacity for emotional manipulation. This charge against poetry has been leveled against rhetoric, too.[2] Since the ancient time, the educational merits of rhetoric have been the subject of close scrutiny. Plato believed the eloquence of rhetoric, for most, makes it more appropriate to the faculty of emotion, and from there it captures the audience’s rational faculty, which its cultivation has been one of the main purpose of education.[3] It is not an exaggeration to say that the compelling nature of rhetoric’s eloquence springs from the way that it delights the audience’s soul. Due to rhetoric’s potentiality for emotional manipulation, it can appear convincing to the audience and sometimes at the expense of suppressing logos.[4] In our modern world with the increasing effects of media and the impacts of their rhetoric on the audience, the question of rhetoric has reappeared to moderns more profoundly than to ancients. Assessing the educational merits of rhetoric is not to dismiss it, but it is to know its limitations in order to use it effectively for educational purposes. I show that how a Platonic understanding of rhetoric can revise our understanding of logos. A good rhetoric is less prone to become a mere tool of convincing only through pleasing the audience. Indeed, in a good rhetoric potentiality of ethos and pathos to seduce the audience is balanced by well-constructed logos, and the educational merits of rhetoric should be gauged in light of how it is able to cultivate logos and make pathos and ethos subordinate to logos.[5]

Public sphere was the core of Athenian democracy where the Athenian citizens could participate in public debates and express their opinions on variety of issues. Rhetoric played a crucial role in those public debates on moral and political issues. Hence, rhetoric, in Athens, from the beginning was part of the practice of citizenry. As a result, rhetoricians gained tremendous educational and political influences among young ambitious people who were seeking fame, glory, and power. On the other hand, there were Greek philosophers whose audiences were not average Greek citizens but more or less educated and prominent Greeks. Rhetoric was defined as the art of persuasion while philosophy was defended as the love of wisdom and seeking it, even if it could bring shame and pain to the seeker of wisdom, like in the case of Socrates’s trial and his following execution. Gradually, intellectual skirmishes arose between rhetoricians and philosophers. These skirmishes were shaped by methodological and epistemological disputes as well as social rivalry between the two groups. In this context, Socrates appeared as a critic of rhetoric. Distinguishes between rhetoric and philosophy goes back to Socrates’s discussions with rhetoricians and sophists in order to defend philosophy against them[6]. Pre-Socratic philosophers expressed their philosophies in a more or less poetic language, and poetry was a way of discovering logos (Heidegger, 1971 Language, Poetry, Thought).

On the other hand, sophists, who made a profession of rhetoric and charged their students for their teachings, claimed that their teachings of rhetoric made their students able to win their conversations over their opponents, a skill that was useful in Athenian democracy to climb sociopolitical ladder. Socrates was deeply dissatisfied by sophists who reduced language as a tool merely for becoming successful in the society or dominating others. Plato’s criticism of rhetoricians have appeared in some of his dialogues, such as the Republic, Gorgias, Phaedrus, Ion, and Sophist.[7]

Plato in the Republic takes on Homer and the impact of his poetry on the education of its audiences. Homer to Greeks was not only a great poet, but Homeric teachings were the foundation of the Greek education. Evaluating Homer’s poetry was, therefore, an attempt from Plato to correct the foundations of Greek education (Republic 379a-380e). Homer, to Plato, talks about so many subjects that it is doubtful that he had an expert knowledge of any. He discusses, to mention a few, causes of war and its strategies, history, mythology, wisdom, and human nature, not from knowledge but from a divine inspiration (Ion 534b7-d1). Furthermore, Homer has misrepresented gods in his fables; for instance, he has talked about gods’ sexual assaults or their jalousies toward each other, and Plato’s concern is that children who hear those fables from childhood will be mistaken about gods perhaps for their entire life. “A young thing can’t judge what is hidden sense and what is not; but what he takes into his opinions at that age has a tendency to become hard to eradicate and unchangeable. Perhaps it’s for this reason that we must do everything to insure that what they hear first, with respect to virtue, be the finest told tales for them to hear” (378d7-e4). In fact, to Plato, Homer was a talented writer who used his divinely inspired intuitions to write beautifully about matters of which he had not robust knowledge. He, hence, was a transmitter of divine inspiration or madness by the way of using eloquence. But to Plato this does not qualify him as a source of wisdom.

In the Gorgias, we see Plato’s full treatment of his concerns regarding rhetoric. In the Gorgias, he analyzes two main rhetoricians’ theses; one is there knowledge-claims about the subjects that they taught, and second is their claim about the connection between their teachings and justice. One of the main concerns of Socrates regarding rhetoricians was that they used the art of persuasion or eloquence to teach about subject-matters of which they were no experts. Socrates realized that misusing rhetoric could function as a veil to cover ignorance while the purpose of a rational inquiry, to him, was unveiling ignorance. Hence, he was the first person who discovered the un-educational use of rhetoric.

Why, one may ask, should we care about the rhetoricians’ knowledge-claims? To Plato, we need to care for two reasons: first those knowledge claims might not constitute knowledge, yet a rhetorician by using a crafty rhetoric can present them as if there were knowledge. The second reason is that because of the affect of a crafty rhetoric on its audience, the falsehood would appear persuasive to them, which is misusing the persuasive affect of rhetoric. In this case, rhetoric not only does not teach the audience how to think, but they will take falsehood for knowledge, and what follows from falsehood cannot be a model for good behaviors. Hence, Plato invites us to assess the pedagogical affects of rhetoric.[8]

“The old quarrel between philosophy and poetry” that Plato mentions in book X of the Republic comes in the form of a full-blown argumentation between philosophy and rhetoric in Gorgias, where Socrates’s interlocutor, by the same name of the dialogue, defines the rhetorician as a maker of speeches of blame and praise, and philosophy is defined as a dialogic series of questioning and answering between interlocutors (448d10)[9]. Gorgias maintains, “Rhetoric is a producer of persuasion. Its whole business comes to that, and that’s the long and short of it” (453a2–3). And persuasion is concerned with the matters of justice and injustice (454b7). In fact, what follows from Gorgias’s definition of rhetoric is that the act of persuasion encompasses almost all ethical and political issues. Soon it becomes clear that the goal of rhetoric, as Gorgias presents it, is at odd with the goal of a Socratic philosopher. Socrates’s goal is to pursue wisdom through dialoguing even if it entails being refuted, while the goal of Gorgias’s rhetoric is “to win” the argument (457b-458c). Refutation of a Socratic philosopher’s argument is not a defeat for the philosopher, but it is a philosophic gain, since by realizing falsehood in their arguments, they can get closer to the truth. On the contrary, Gorgias, by his own goal, is compelled to persist on his false beliefs since acknowledging his mistake is admitting his defeat, or flaw in his rhetoric.

[2] The Oxford English Dictionary (1992) defines rhetoric as “the art of using language so as to persuade or influence others’. For Potter (1996: 106), ‘rhetoric should be seen as a pervasive feature of the way people interact and arrive at understanding.”

[3] Plato has a broad definition of poetry, and it entails the act of making speech and also the product of making speech. The Greek word of poioe means to make, and also it is the variation of the same word that was used for poetry. Socrates in Symposium about poetry states, “Well, you know, for example, that ‘poetry’ has a very wide range. After all, everything that is responsible for creating something out of nothing is a kind of poetry; and so all the creations of every craft and profession are themselves a kind of poetry, and everyone who practices a craft is a poet” (Symposium 205b8-c2).

[4] It is noteworthy to mention that by this I do not mean that logos is a social construct. If it were, logos would be another tools of seduction or manipulation, which each group of society would use to establish their own ideology. If it were, logos would be reduced to a mere practical tool used to overcome rival ideologies. This reductionist view, turns the rationality of logos impossible. To see the rationality of logos, it is to acknowledge its capability for reflexivity, which is being able to sort out between truth from falsehood.

[5] Believing in educational merits of rhetoric entails that it should not be reduced to “empty rhetoric” or worse for demagoguery.

[6] In ancient Greece, rhetoricians were not necessarily sophists, but these two groups were closely related.

[7] The tension between philosophy as pursuit of wisdom and rhetoric as the art of persuasion is also is a recurring theme in Cicero’s works too. Cicero tries to bridge between the two. In His De Oratore, he states, “The followers of Socrates cut connection with the practicing lawyers and detached these from the common title philosophy, although the old masters had intended there to be a marvelously close alliance between oratory and philosophy” (III, xix, 73). Petrarch, the prolific writer of Renaissance also deals with this tension in his various works. In a letter written in 1350-51, he states, “The care of the soul requires the philosopher [and] the learning of the tongue is proper to the orator. Neither should be neglected” (qtd. in Rhetoric and Philosophy in Renaissance Humanism 47)

[8] It is not to say that Plato’s Socrates was against rhetoric or even poetry. Plato himself was a great writer and excellent poet. To Plato, a philosophical poetry that can bestow a better understanding of reality or a rhetoric that makes students to think more creatively was not only essential, but himself is a master of using proper use of rhetoric.